Current belief is that over loading of the front of the disc causes the disc to bulge posteriorly, eventually herniating and compromising the space of the nerve roots. This argument is not entirely true, but for the sake of this article I will not go into detail about the causes of herniated discs. The theories about how and why extension of the spine helps this condition are equally flawed. The proponents of extension state that in an extended position of the spine the pressure is removed from the anterior portion of the disc, and the pressure on the posterior portion of the disc that is created from the position allows for the disc contents that have herniated (the nucleus of the disc) to move back into place.

This is taught in schools, in continuing education programs, and is all over the internet. It was the way I treated when first started practicing, and I had some success doing it. However, in many cases finding a comfortable amount of extension was hard. Many, especially the very acute/painful, herniated disc patients found it increased their pain in their lower back. We were taught a concept called “centralization of symptoms” which stated if the symptoms eased in the leg, yet increased in the back, it was a good sign that the nerve was under less compression. But this theory counters a more intuitive concept that “pain is a sign that something is wrong”.

Then one day a patient with lower back pain and radiating pain in one of his legs came to me, and changed how I treat herniated discs forever. He brought me a set of MRI films like I had never seen before. A typical MRI is done in a tube with the patient lying on their back. He had these films with him as well and they showed a 5 millimeter protrusion in the L5-S1 disc. What was most interesting was the other set of films he had with him. They were films of him standing in a neutral spine position, in a forward bent (flexion) position, and in a backward bent (extension) position. The films were taken within a few weeks of his first MRI with no significant episode to worsen the condition. By changing the position from lying down to standing in neutral the protrusion increased to 7 millimeters. In flexion, the protrusion increased to 10 millimeters, and in extension the protrusion increased to 13
millimeters. That was the day I stopped any extension exercises for my patients.

The structure of a healthy disc is a tough, fibrous, almost gristle-like tissue capable of shock absorbing for all of the activities we like to do. When excessive wear over time occurs, the disc becomes tenderized and mushy. Extension promotes further migration of the disc toward the nerves. My opinion about why many patients benefit from this extension movement has nothing to do with its effect on the disc, but rather its effect of stretching the hip flexor muscles. One hip flexor, the psoas originates along the lateral surfaces of the vertebral bodies of T12 and L1-L5 and their associated intervertebral discs. It inserts at the lesser trochanter of the femur. When the lumbar nerve roots become irritated from a herniation or for any other reason, these muscles become very tense due the excessive messages being sent to them from the hyper-excited nerve causing additional shortening.

A more effective approach to treatment is to lengthen the muscles that are contributing to compression of the disc in conjuntion with decompression of the disc through manual or mechanical methods, reducing inflammation and normalizing the nerve, and improving core muscle strength and coordination to help shock absorb for the mushy disc as it tries to heal. I will not discuss specific methods of how to implement these treatments within this article as they should be instructed under the guidance of a professional versed in these methods.

If you would like to schedule a “discovery session” to get specific information about your condition: CLICK HERE and enter code SCREEN35 to receive a special price for your initial session.

Don’t live in the area of our clinic? Don’t let distance be an excuse for your pain. Use technology to bring an expert to your living room or home office with our Virtual PT sessions. To learn more CLICK HERE.

Trevor Field is a physical therapist in Rancho Cucamonga, California, specializing in treatment of adolescent athletes, and has developed programs for ACL injury prevention, and sports performance enhancement. To learn more, go to www.formfunctionpt.com 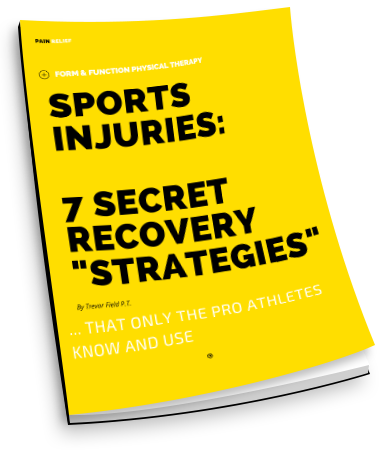